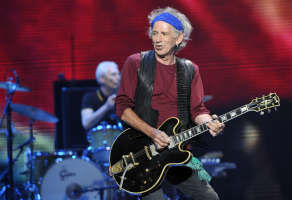 Keith Richards (born 18 December 1943) is a founding member, and guitarist, of the Rolling Stones. He has written most of the band's music alongside songwriting partner Mick Jagger. Apart from his work with the Stones, he has another band the X-Pensive Winos, and has released two solo albums.

Keith Richards, the only child of Bert Richards and Doris Dupree Richards, was born in Dartford, Kent. He is of Welsh and French Huguenot ancestry. His father was a factory labourer who was slightly injured during World War II.

Richards's paternal grandparents were socialists and civic leaders. His maternal grandfather (Augustus Theodore Dupree), who toured Britain in a jazz big band called Gus Dupree and his Boys, was an early influence on Richards's musical ambitions and got him interested in playing guitar.

Richards's mother introduced him to the music of Billie Holiday, Louis Armstrong and Duke Ellington, and bought him his first guitar — a Rosetti acoustic — for seven pounds. His father was less encouraging: "Every time the poor guy came in at night," Richards says, "he'd find me sitting at the top of the stairs with my guitar, playing and banging on the wall for percussion. He was great about it really. He'd only mutter, 'Stop that bloody noise.'" Richards's first guitar hero was Scotty Moore.

Richards attended Wentworth Primary School, as did Mick Jagger; the two knew each other as schoolboys, and lived in the same neighbourhood until Richards's family moved to another part of Dartford in 1954. From 1955 to 1959 Richards attended Dartford Technical School (now named Wilmington Grammar School), where choirmaster Jake Clair noticed his singing voice and recruited him into the school choir. As one of a trio of boy sopranos Richards sang (among other performances) at Westminster Abbey in front of Queen Elizabeth II - an experience that he has called his "first taste of show biz."

In 1959, Richards was expelled from Dartford Technical School for truancy, and the headmaster suggested he would be more at home at the art college in the neighbouring town of Sidcup. At Sidcup Art College Richards devoted his time to playing guitar after he heard American blues artists like Little Walter and Big Bill Broonzy. He swapped a pile of records for his first electric guitar, a hollow-body Höfner cutaway. Fellow Sidcup student and future musical colleague Dick Taylor recalls, "There was a lot of music being played at Sidcup, and we'd go into the empty classrooms and fool around with our guitars. ... Even in those days Keith could play most of Chuck Berry's solos." Taylor also remembers Richards experimenting with various drugs at Sidcup: "In order to stay up late with our music and still get to Sidcup in the morning, Keith and I were on a pretty steady diet of pep pills, which not only kept us awake but gave us a lift. We took all kinds of things - pills that girls took for menstruation, inhalers like Nostrilene, and other stuff. Opposite the college there was this little park with an aviary that had a cockatoo in it. Cocky the Cockatoo we used to call it. Keith used to feed it pep pills and make it stagger around on its perch. If ever we were feeling bored we'd go and give another upper to Cocky."

One morning in 1961, on the train journey from Dartford to Sidcup, Richards happened to get into the same carriage as Mick Jagger, who was then a student at the London School of Economics. They recognized each other and began talking about the LPs Jagger had with him - blues and rhythm & blues albums he had acquired by mail-order from America. Richards was surprised and impressed that Jagger not only shared his enthusiasm for Chuck Berry and Muddy Waters, but also that he owned such LPs which were extremely rare in Britain at the time. The two discovered that they had a mutual friend in Dick Taylor, with whom Jagger was singing in an amateur band called Little Boy Blue and the Blue Boy. Jagger invited Richards to a rehearsal and soon afterwards Richards also joined the line-up. The group disbanded after Jagger, Richards and Taylor met Brian Jones and Ian Stewart, with whom they went on to form The Rolling Stones (Taylor left the band in November 1962 to return to art school).

By mid-1962 Richards had left Sidcup Art College in favour of pursuing his fledgling musical career and moved into a London flat with Jagger and Jones. His parents divorced about the same time. Richards maintained close ties with his mother, who was very supportive of his musical activities, but he became estranged from his father and didn't resume contact with him until 1982.

In 1963 Richards dropped the "s" from his name and used the professional name "Keith Richard", which Stones manager Andrew Loog Oldham considered more suitable as a show business name.