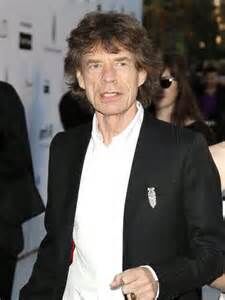 Sir Michael Philip "Mick" Jagger (born 26 July 1943) is a founding member, and the lead singer, of the Rolling Stones. He has most of the band's music alongside songwriting partner Keith Richards. Apart from his work with the Stones, he has released four solo albums.

Jagger was born into a middle-class family at the Livingstone Hospital, Dartford, Kent, England. His father, Basil Fanshawe ("Joe") Jagger, and his paternal grandfather, David Ernest Jagger, were both teachers. His mother, Eva Ensley Mary Scutts (13 April 1913 – 18 May 2000), an Australian immigrant to England, was a hairdresser and an active member of the Conservative Party. Jagger was the elder of two sons and was raised to follow in his father's career path.

In the book According to the Rolling Stones, Jagger states "I was always a singer. I always sang as a child. I was one of those kids who just liked to sing. Some kids sing in choirs; others like to show off in front of the mirror. I was in the church choir and I also loved listening to singers on the radio - the BBC or Radio Luxembourg - or watching them on TV and in the movies."

Academically successful, he attended Dartford Grammar School where he passed 3 A-levels, before entering the London School of Economics on a scholarship. As a student, Jagger frequented a London club called "The Firehouse". At the age of 19, Jagger began performing as a singer. Jagger had no formal musical training and did not know how to read music.

In the early 1950s Keith Richards and Mick Jagger (who as a youngster preferred to be known as "Mike") were classmates at Wentworth Primary School in Dartford, Kent. Having lost contact with each other when they went to different schools at the age of 11, Richards and Jagger resumed their friendship in 1960 after a chance encounter and discovered that they had both developed a love for rhythm and blues music, beginning with Little Richard. They moved into a flat in Chelsea with a guitarist they had encountered named Brian Jones. While Richards and Jones were making plans to start their own rhythm and blues group, Jagger continued his business courses at the London School of Economics. Although he studied for a degree in accounting and finance, with a minor in physical education, he attended for less than a year and did not graduate, leaving instead to pursue a musical career.

Jagger is renowned for his multiple high-profile relationships. He has been married twice.

In 1970 he began a relationship with Bianca De Macias, whom he married on 12 May 1971 in a Roman Catholic ceremony in Saint-Tropez, France. Bianca filed for divorce in 1978 and they were officially divorced in 1979 on the grounds of his adultery. Bianca later said "My marriage ended on my wedding day"

In 1978 he began seeing model Jerry Hall, while still married to Bianca. After a lengthy cohabitation and several children together, the couple married on 21 November 1990 in a Hindu beach ceremony in Indonesia. Jagger later contested the validity of the ceremony, and the marriage was annulled in 1999. This was subsequent to Jagger's affair with and the pregnancy of model Luciana Gimenez.

He also has four grandchildren.

In 2008 it was revealed that members of the Hells Angels had plotted to murder Jagger in 1975. They were angered by Jagger's public blaming of the Hell's Angels, who had been hired to provide "security" at the infamous Altamont Free Concert in December 1969, for much of the crowd violence at the event. The plot was cancelled after the boat they were to use to access his Long Island home capsized in a storm.

Jagger is an avid cricket fan. He founded Jagged Internetworks so he could get coverage of English Cricket. Mick Jagger also introduced Paul Getty to cricket.

His personal fortune is an estimated £225m. 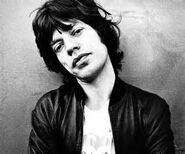 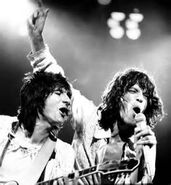